A Medical Dictionary in Three Languages

It’s like telepathy: some of my colleagues have been asking about specialized dictionaries on online forums or in person. Clearly, I haven’t been the only one asking around! In my search for dictionaries in various fields, such as medicine, environment, and communication, I crossed paths with a medical dictionary on Amazon’s website. At first I had mixed feelings about purchasing a reference tool online, but in the end, I caved in and bought it. The good news is, I received the dictionary last week. 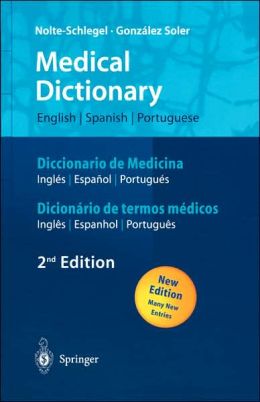 If you’re a medical translator who works with Spanish, English, and Portuguese, you might want to consider Dr. Irmgard Nolte-Schlegel’s and Dr. Joan José González Soler’s Medical Dictionary: English, Spanish, Portuguese. This second edition has over 4,000 entries, and provides translators with general medical terminology. As one would expect, this work is geared to physicians, medical students, doctors, and other professionals who work in the medical field. One of the aspects that caught my attention was the focus on terms unique to Brazilian Portuguese.

The work is divided in three sections. The first lists English terms followed by equivalents in Spanish and Portuguese. The second section is devoted to Spanish terms; the English and Portuguese terms follow. The last section puts Portuguese to the fore. Readers are then greeted with English equivalents followed by those in Spanish. In each section, the authors have done a good job at presenting the major medical terms, including syndromes, diseases, psychological states, and biological notions. In addition, readers may see parts of speech associated with some terms in question. For instance, in the Portuguese–>English–>Spanish section, the entry relação collocates with haver relação causa-efeito. Haver is an auxiliary verb followed by the main entry, its subjects, and objects, as necessary. We then read the respective equivalents “relation, relationship, connection (be in causal relationship)” in English, followed by “relación (tener relación causa – efecto)” in Spanish.

This reference tool has its drawbacks, though. How do we know if the word entries listed are used in all English, Spanish, or Portuguese-language countries, or if they are particularly used in the United States, the United Kingdom, Spain, Latin America, Brazil, or Portugal? In the Spanish–>English–>Portuguese section, for example, we see the term constitucional followed by (USA) constitutional, (P) constitutional. We could presume that “P” stands for Portuguese or Portugal. Could we assume, however, that the English “constitutional” is a term used only in the United States, or could it also be used in other English-language communities, such as in the Caribbean, in Canada, in the United Kingdom, Australia, Ireland, or South Africa? The authors cannot provide us with answers. What about the Spanish terms? Are all of them like parálisis commonly used in Spain and Latin America, or are some more common in Spain than in Latin America, or vice-versa? In the case of Latin America, what terms are more common, say, in Mexico, Venezuela, El Salvador, Guatemala, and Peru, or the least common in Chile, Bolivia, Argentina, and Columbia? Here’s another problem: Spanish in the United States. What terms are common among Spanish-speaking medical professionals south of Canada? There, too, the authors cannot tell us.

Our next conundrum lies with Portuguese. What spellings are to be used in dictionaries? In 1990, all Portuguese-language countries—Portugal, Brazil, Angola, Guinea-Bissau, East Timor, Mozambique, Macau, Cape Verde, São Tomé e Príncipe—agreed to create a “universally acceptable” spelling system for everyone who works and lives in Portuguese, and for all who desire to learn the language. On July 21, 2008, Portugal adopted the spelling reform; Brazil adopted this same reform on January 1, 2009. As expected, it does not reach unanimity with worldwide authorities (to be continued in a possible future entry). At any rate, the reader of this dictionary is confronted with spellings like infecção (infection), acção prolongada (long-term effect), artefa(c)to (artefact), and frequência cardíaca (heart rate). If we are to abide by the reform, the equivalents of “infection,” “effect,” “artefact,” and “rate” should be respectively written infeção, ação, artefato, and frequencia. The authors seem to have not taken the spelling reform into consideration.

Another drawback of this dictionary is that the authors sometimes list Brazilian Portuguese terms without mentioning if these same terms have other equivalents in the remaining Portuguese-speaking countries (see above). Let us consider coqueluche (whooping cough, pertussis). The authors clearly indicate that the term is used in Brazil (abbreviated bras.). The trouble is, however, we do not know if coqueluche is used just as often in other countries. This can leave Portuguese-speaking professionals scratching their heads.

Here’s one last drawback. The authors neglected to provide readers with a list of abbreviations, either at the beginning or end of the work. In most dictionaries, authors and editors reserve a page for abbreviations to let us know what each of them stand for, e.g. m. = masculine noun; f. = feminine noun; adj. = adjective, and so on. Such a page in Nolte-Schlegel’s an González Soler’s work would have made readers’ lives a little easier.

Despite the dictionary’s missteps, the Medical Dictionary: English-Spanish-Portuguese remains a good guide for beginning and experienced medical professionals. It is also a good tool for medical translators, editors, and writers alike. The authors have also prepared a similar work for those who work with German, Spanish, and Portuguese. The title is Medizinisches Wörterbuch: Deutsch-Spanisch-Portugiesich/Diccionario de Medicina: alemán-español-portugués/Dicionário de termos médicos: alemão-espanhol-português, 2. Auflage. Dr. Eugen Gottret contributed to the German translations.

← Linguee Available in Other Languages!
Volunteering and Language Services →

The Art and Craft of Blogging

Thoughts on translation, freelancing and life...

launches a project every month

A bucket list blog: exploring happiness, growth, and the world.

A literary blog of poet, playwright and essayist Rachael Stanford

4 out of 5 dentists recommend this WordPress.com site

An Irishman's blog about the English language.